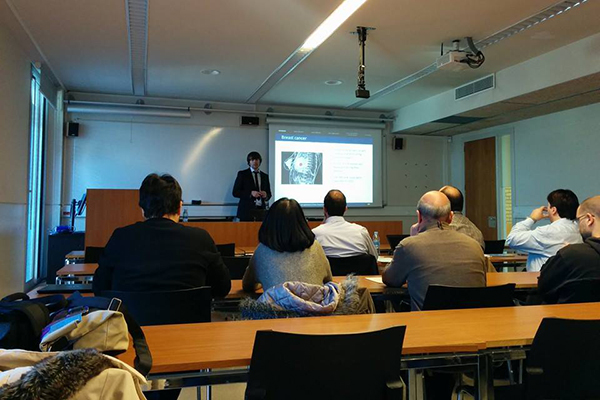 12 March In News, Thesis by ViCOROB

This thesis deals with the detection, segmentation and classification of lesions on sonography. The contribution of the thesis is the development of a new Computer-Aided Diagnosis (CAD) framework capable of detecting, segmenting, and classifying breast abnormalities on sonography automatically. Firstly, an adaption of a generic object detection method, Deformable Part Models (DPM), to detect lesions in sonography is proposed. The method uses a machine learning technique to learn a model based on Histogram of Oriented Gradients (HOG). This method is also used to detect cancer lesions directly, simplifying the traditional cancer detection pipeline. Secondly, different initialization proposals by means of reducing the human interaction in a lesion segmentation algorithm based on Markov Random Field (MRF)-Maximum A Posteriori (MAP) framework is presented. Furthermore, an analysis of the influence of lesion type in the segmentation results is performed. Finally, the inclusion of elastography information in this segmentation framework is proposed, by means of modifying the algorithm to incorporate a bivariant formulation. The proposed methods in the different stages of the CAD framework are assessed using different datasets, and comparing the results with the most relevant methods in the state-of-the-art

Sorry, the comment form is closed at this time.