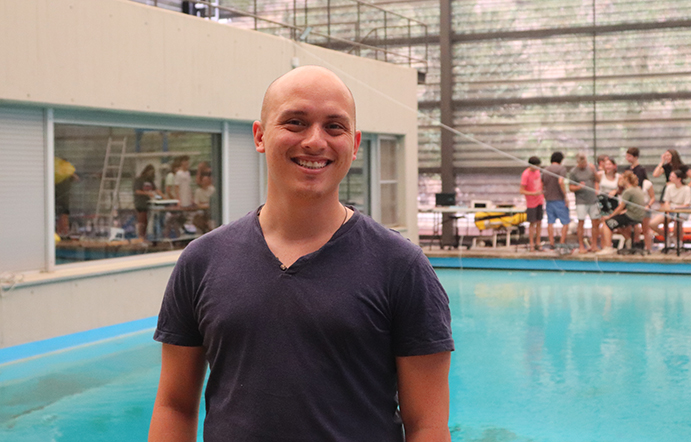 Eduardo Ochoa is a 31-year-old Ph.D. student from El Salvador that is currently starting the third year of his doctoral studies at the Centre d’Investigacio en Robotica Submarina (CIRS) at VICOROB.

Eduardo started his studies in El Salvador, where he graduated in Mechatronics Engineering at the Don Bosco University in 2014. In 2017, he began the Erasmus Mundus master’s in computer Vision and Robotics (VIBOT) a joint degree from the University of Burgundy, University of Girona, and Heriot-Watt University.

It is from this master’s program that he got in contact with the CIRS. During the end of the first year of his Master’s, he did an internship with this research center, focused on researching algorithms to perform Simultaneous Localization and Mapping (SLAM) with multi-camera systems. Following this research line, he returned to the CIRS to do his master thesis, where he started researching algorithms to perform collision detection and avoidance with Underwater Vehicles using cameras as the only sensor to perceive data from the world. In 2019, he graduated from VIBOT and continue his research at CIRS as a Ph.D. student.

In the last months of 2019, Eduardo was awarded an FPI grant to pursue his Ph.D. thesis in Collision Detection and avoidance algorithms for Underwater Vehicles supervised by Dr. Nuno Gracias and Dr. Rafael Garcia. Currently, he is focusing his research on algorithms for collision avoidance with omnidirectional multi-camera systems. As a result of his research, he has won third place in the Student Poster Competition in the OCEANS 2020 Singapore – U.S. Gulf Coast. Also, he is now trying to integrate new technologies, such as the Event-Based Cameras (EBC), to perform accurate and robust localization algorithms that can cope with motion blur and scenarios with low illumination.